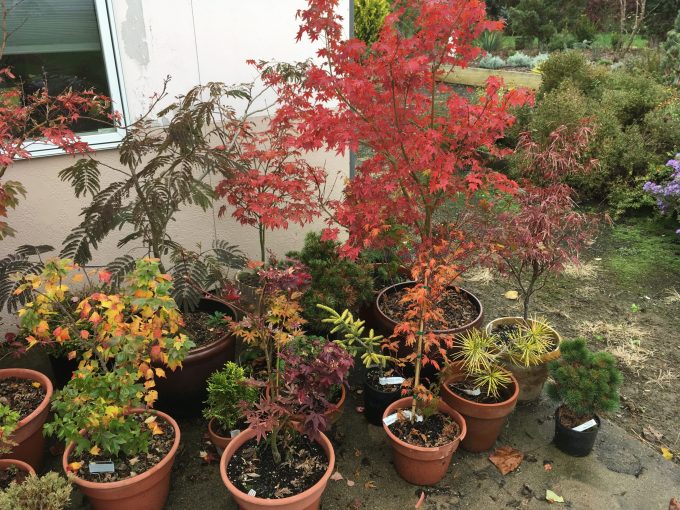 Say what? Bedtime for the garden? It’s the end of November, there have been several frosts (temps into mid-low 20s) and there are still things in bloom in the garden. I’ve had roses in bloom in December in a garden in the middle of Columbus, but never anything close to that out here in the sticks. A few more days of this and we may well see more roses in bloom; several of the shrubs are nicely budded! We know it won’t last, but it’s kind of fun while it does.

This past fall just seemed to be ever-so-elusive with warm temperatures, the annual stretch of drought coming considerably later than usual, and a really pathetic display of mostly not color with a few, stunning exceptions. It makes it nice to have a few late days decent enough to permit last-minute puttering. Now, I admit that puttering in the greenhouse in the middle of January and February is also great fun, a veritable thumbing-of-the-nose to the wind, snow and cold outside all the while wishing (usually against the odds) that the cold will last until mid-spring.

Not that we like the cold…..but, ah! we do!  For the killing of insect pests and their eggs, for the slowing down of the perennial weeds (we have a bumper crop of those dreadful ‘shot-gun’ weeds, a type of cress, in evidence all over), and for the chance to simply rest a bit without the daily pressure of ‘get it done now!’. A sensory deprivation chamber is not my idea of a fun experience and I’ve always had the feeling that a year without a winter would be like that. I realize that most folks don’t share that view, which is why small, 2 bedroom houses in Southern California sell for a small fortune! It surely can’t be because people love dealing with 16 lane traffic on a daily basis!

But springs in Ohio seem to have a way of trying to rush the season, often with disastrous results for many plants, chief among them Japanese maples. Maples, especially small ones, tend to start sap flow at the earliest indication of warmer weather; this makes them particularly susceptible to early spring freezes which then cause the bark to split when the sap freezes and expands and they are damaged or, just as often, they will die outright. This is far of a problem out here in the wind lane than in cities and towns which is why our Japanese maples all spend their winters in the greenhouse!