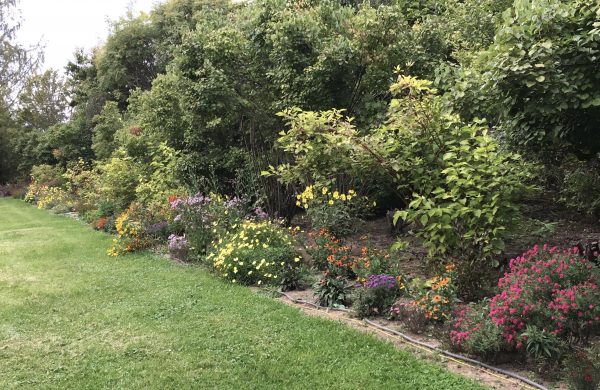 Well, what else would you call it (keep it clean now); it’s nearly 140′ long and started out about 6′ deep, now 8′. It has been a dream for years; 2017 saw the first steps to reality. The area was cleared of weeds and grass during the fall and winter of 2016 and that work was completed this past spring. Planning was on-going for nearly six months before the first hole was dug. In June planting was begun and continued into September; there will be more in 2018.

The border was designed to feature the ‘hot’ colors: yellows, oranges, reds, purples with some lavender and magenta (thanks to the late Christopher Lloyd) for an increase in visual ‘spark’. It will begin to come into its own in June, usually later than earlier, and peak from July up into September, all depending on weather, of course. The background was originally planned as an informal tapestry hedge, mixing Prunus cistena (purple sand cherry), Cornus alba ‘Golden Prairie Fire’ or ‘Aurea’ (yellow-leaf, red twig dogwood), Viburnum dentate ‘Autumn Jazz’,  Ilex serrata x verticillata (sparkleberry), and Rhamnus frangula ‘Columnaris’ (tall-hedge).

In 2016 most of the sand cherry succumbed to borers and were cut back; few survived. They were also neon signs for the local Japanese  beetle population and had gotten quite large. They have been replaced with Weigela ‘Wine and Roses’ with the intent that we could still get the impact of the purple-red foliage with the added benefit of flowers in late spring and a more controlled size. The sparkleberry are only marginally successful with little fruiting; they may not be granted a much longer tenancy. The tallhedge proved to be a pest (be warned when you see ‘may self-seed’; that means it WILL self-seed and far more heavily than you ever imagined) and most have been removed. The viburnums are almost too happy, but they don’t mind being thinned and cut-back, so they are continuing to provide the major function for which the hedge was planted in the first place: to provide screening for an area that would remain unseen from anywhere else in the garden, until you are in it. The hedge also provides a soft and irregular “wall”, giving a sense of solidity and stability to a border that is intended to be riotous when in flower.

So far, I am extremely pleased with it’s development; it is beginning to do what I had hoped for. In fact, I am amazed at how quickly the plants took hold and filled in. I watered only a few times right after initial planting to give them a foot-hold and a couple more times during the droughty stretch, but otherwise, they’ve been on their own. The real test will come next spring: will they survive and flourish? We shall see.  Here’s a closer shot of BHB from one end: