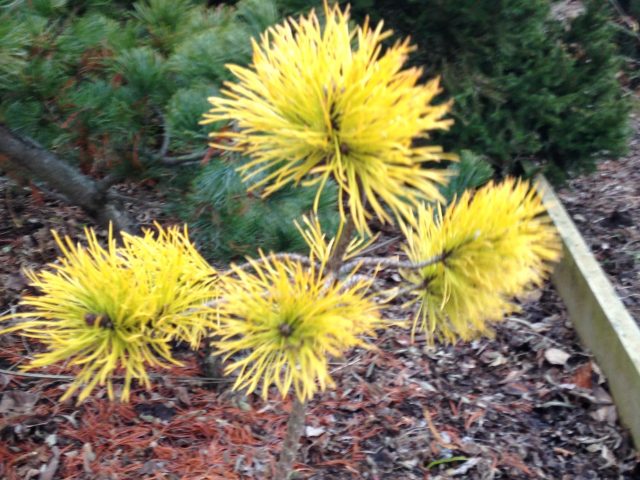 Not wishing to do ‘yet another commentary about screw-ball weather’, I searched through some photos taken earlier in the year for a topic but then realized that I could not avoid the issue!

Here are two photos from January 17.  The one that is least out-of-focus is a wonderful conifer of the genus Pinus, species contorta (the lodgepole pines), cultivar ‘Chief Joseph’.

It is one of the conifers that colors itself yellow for the winter.  We have several in the garden and they are always beautiful and always a delight, but ‘Chief Joseph’, even though smallish (and this one is probably 4-5 years old) is easily the most spectacular and brightest of them all.  I once had a gardener say to me, having seen a example of this plant in its full winter show-off mode (and this must be repeated in a very strong, southern drawl for full effectiveness), “It just made me want to go out and throw rocks at all of the rest.”  Well now, I don’t think I’d be willing to go that far, but it DOES make a statement. It is placed so as to be immediately visible upon either entering or leaving the house and it never ceases to please and brightens many an otherwise dull, winter day. Summer produces a pretty pedestrian green but it’s glory isn’t needed then anyway.

On that day in January, I had been out and admiring the plant from close up and as I headed to the greenhouse for a recreational hour of cleaning and repotting, etc., I spotted the dandelion shown (sorry for the focus).

The title of this entry immediately came to mind, right on the heels of ‘what an optimist’!  Whether it was showing its stuff out of jealousy or mimicry or ‘victim of deception’ mode, I can’t say, but there it was – mid-January in Ohio. Really?!?!

One might be tempted to conclude that it is now getting safer and safer to plant things that might have been only marginally hardy in years past, but I would issue caution unless you have a big enough credit line to not worry about losing a lot of pricey plants. (And this is NOT a screed against high plant prices; to the contrary – I would encourage good nurseries to be sensible with their business model because we’d like for them to be able to stick around; we’ve already lost far too many already.)

The first reason for this un-requested advice is that hardiness, even though rated on a basis of low temperature tolerance, is really dependent on multiple other factors as well. I’ve been long convinced that poor drainage and wind will kill more plants here than winter cold at its worst. Warmer winter temperatures won’t change that; in fact, they probably make it worse with the increase of rain replacing snow as the dominant precipitation form.  The second reason is that many plants actually need an extended period of dormancy to thrive and being awakened prematurely from winter naps is not particularly conducive to long-term health, especially when it happens multiple times.

Nearly all hardy plants possess enough resilience to manage a thaw/freeze cycle but they are not built to handle multiple sequences of up and down, new growth followed by dieback and then repeated. That new growth needs energy to happen and because no photosynthesis is happening with snow cover, plants must rely solely on stored and/or external (most of the time) food and moisture sources but the ground is frozen or at least too cold for much nutrient movement. If you simply MUST HAVE that incredible zone 7 plant, then put it in a pot and overwinter it in the greenhouse. It will not only survive but be more useful that way.