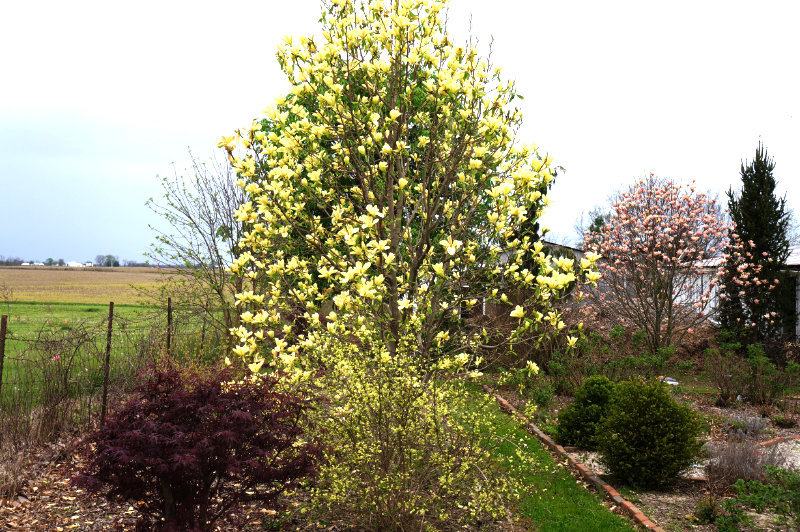 In his poem “The Waste Land”, T. S. Eliot used the phrase, ‘April is the cruelest month’. While the meaning of poem has no ostensible gardening connections (and, like all good poetry, could be intrepreted in more than one way) and I don’t think he was referring to tax time, I have often thought of this phrase as it might regard the weather in April. In most cases, the cruelty is the result of sudden and drastic temperature drops which cause flower losses, especially for the fruit trees, if not even more plant damage to Japanese maples and magnolias and other trees with early sap flow. A friend who lives in Georgia informs me that this has happened there this year, effectively wiping out the year’s peach and blueberry crops (so stock up on the frozen ones before the price goes through the roof!). However, in Ohio the opposite seems to be the case this season and while April is normally a month of 50s (from low to high as the month progresses), this past weekend saw temperatures in the low 80s and many, many days already in the 70s. This may not seem ‘cruel’, especially if you’re a warm weather lover, and it may not compare to hard freeze-induced damage but it is cruel in a different way. Right now, the garden has three different magnolias in full display, one yellow, one pinkish-gold and one in coral and undoubtedly the most floriferous they’ve ever been. The problem is, the flowers won’t last. The display will be magnificent… and disappointingly short-lived. The bird cherries (Prunus padus) started two weeks ago, were stunning, and have already gone over. These, and other such spring display blossoms, are used to being gently coddled by more temperate temperatures and the flowers simply don’t have the stamina to last very long at levels 20 degrees warmer than usual. We have chosen our magnolias so that they have little chance of getting whacked by the earlier spring freezes but the payment for that decision is obvious this year. One barely has time to send out a note saying “The magnolias are spectacular this year” before it’s too late to enjoy them. Bummer.

Of course, averages are the result of highs and lows and rarely a reflection of a ‘normal’ but limited range of temperature; when the latter does happen, it will make for a spring of simply unforgettable beauty with all of the normal spring effects of new foliage (is there anything more breathtaking than the emerging foliage of young hosta leaves?) and flowers which continue to slowely develop and LAST for a month. Alas, this is rare and all the more wonderful for its infrequent happening!

It appears that the heaviest of the late winter/early spring rains have abated for the time being and, with the wind and heat, it is actually dry enough in most parts of the garden to begin planting and that is now underway. This process, along with the continual weeding (necessary until the leaf mulch is in place), trimming, and mulching will be going on in earnest for the next 8-12 weeks! I am obviously optimistic that we will avoid any of the cold cruelty April can inflict.

We are adding more new plants this year than have ever before been put into the garden in a single season so some cooperation from the weather is indeed appreciated. But, when all is said and done, I’d still rather have had an ‘English’ spring (what I call the nice and easy, slow and gradual, warming – which is probably an inaccurate tag, but allow me the fantasy….after all, THEY have had things blooming in their gardens since JANUARY and they won’t peak until a full month after we do here, so I’m going to cut myself some slack).