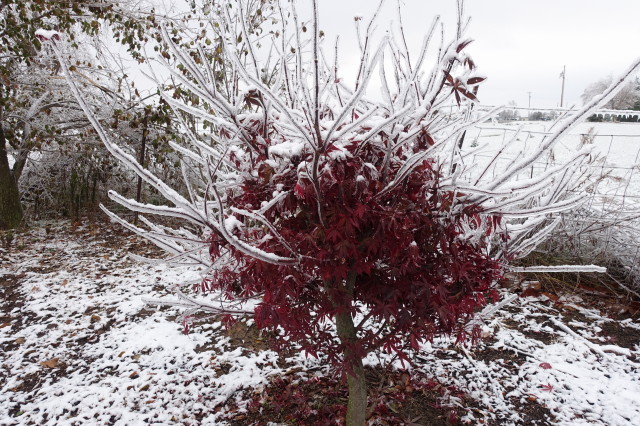 WHEN THE BEAUTIFUL CAN BE HORRIFYING –
How often we have heard the phrase “Beauty is in the eye of the beholder”. I’m afraid I don’t recall where I saw this nor the author but I will never forget the rejoinder: “so is ugly.”

Well, sometimes the same thing can be both. Some of our more obnoxious weeds can have the most spectacular flowers, even spectacular foliage and, unfortunately, a most spectacular way of spreading well beyond the realms of good taste much less that of our wishes for our gardens. Sometimes too much of a beautiful, good thing can become ugly in its effect, crowding out the other equally attractive things we tried to pair it to. The same is true for weather. Here in southwest Ohio, we had August in April this year (or so it seemed). It’s always maddening to hear members of the general public regale temperatures in the 80s in early spring; I want to yell loudly, “It’s too hot, too soon; there will be consequences!`”. Consequences as in growth that is too rapid and therefore too tall and leggy and too weak to keep looking at the world from an upright position and weeds that attempt to keep up. Or even worse, warm weather when it’s still supposed to be winter and plants, not being readers of calendars, respond by budding out only to be whacked by a nasty freeze.
If you want warm weather in February you should live in Florida or someplace similarly placed.

Well, we are – as I write this – experiencing the flip side of early thaw then freeze. We now have freeze but not quite but maybe freeze again; a temperature warm enough to melt ice seems to be eluding us today. Details: there was about ¼ of an inch of ice on everything when I got up this morning. That (actually less, a tenth of an inch) was forecast and therefore somewhat expected. But then, a light rain started and the temperature (which was 33) didn’t budge and hasn’t done so all day. It is now about 5:30 and the sun (which we didn’t see all day) has set and the temperature is now 32. This has resulted in an accumulation of ice during the day and, on some plants, it is now close to ½ inch. This is likely to remain until mid-30s temperatures return, sometime mid-day tomorrow (we hope). There has also been no wind so when the ice was most vulnerable during the day and a bit of a breeze would probably have removed it from some of the plants, it remained utterly still.

On one hand, the view out of the windows is that of a winter wonderful, a spectacular array of silver and white. And it is an utter disaster as far as many of the plants are concerned. The large Sophora (newly renamed Styphnolobia by manic taxonomists) japonica (one of the oldest trees in the garden and which bloomed for the first time this summer) has seen its tallest branch split and break in two places; the upright (fastigiate) beech, Red Obelisk, which is near the garden entrance has branches splayed all which way, looking like a moderate-sized weeping willow. Many conifers are sprawled in disheartening array and the (usually evergreen) Sweet Bay Magnolia (Magnolia virginiana ‘Santa Rosa’), a proud twenty-footer, is so beaten down that I am able to touch its top growing tip without even stretching. I shudder at the thought of having to walk through the garden tomorrow and assess the rest of the damage. This is easily the most serious event we have experienced in this garden in the 16 years since planting was begun.

There is a peculiarly cruel irony at work here: it was not an easy season. Extreme heat (for us) and humidity made working in the garden a real challenge; battling a skin issue on my arms following a poison-ivy bite only added to the discomfort and yet, by the end of the summer and into the fall, the garden was looking pretty good. Fall color was seriously delayed but when it came it was gorgeous. The overall condition of the garden was as good as it’s ever been, owing to the fact that I retired as a practicing RN in the middle of the summer and had just finished the transition from catch-as-catch can to full-time gardener. I was sincerely hoping we had paid forward on a nice fall and moderate winter!

One usually learns early on in one’s gardening experience that the vagaries of weather are something one can do little about, especially when violence or major water issues are in the fore (and ice is, believe me, a major water issue!). That does not make episodes like the current one any more palatable or easy to abide. When one has already passed the Biblical allotment of age, most of life’s nastier surprises have already been experienced at least once, but it does not make them any easier to bear. Such is the case of the death of Linda Morgan, friend, supporter, and gardener from Washington Court House, Ohio only a few weeks ago because of a freak accident. Linda was a frequent visitor and we could always expect a smile and a laugh and a positive outlook, in spite of her own health issues. She was a cheer-leader for the goodness of gardening and it’s positive relationship-building aspects and she will be surely and sorely missed.

Having written all this, I feel a bit like the little guy with the droopy black hat from the old Superman comic book days who walked around with a gloomy and dripping rain cloud over his head. I must not let this persist, so I promise a more upbeat update in a week or so when I’ve had time to figure out how to make what is obviously (at the moment) a disaster in the garden into new opportunities. Right now it just feels sad. And it still looks beautiful!