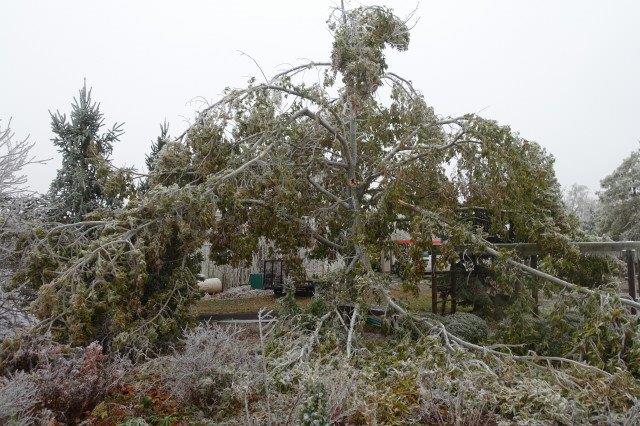 (above) Quercus acutissima (sawtooth oak) – note the trellis on the right, partly covered by downed branches: it is over 6′ tall!

Ten days ago, I wrote, bewailing our bad luck, of being the recipients of 1/2” of ice, lasting something like 36 hours. A lot of damage? Well, yes but, with one apparent exception, none of it was fatal. The 25’ sawtooth oak (Quercus accutissima) that was located near one corner of the rose garden, lost several large branches (5-6” in diameter) and this has exposed the fact that the center of the tree was hollow and obviously diseased. So better it come down now rather than in the middle of the active growing season. In fact, it will probably improve that corner of the garden, removing some competition and shade where it wasn’t really wanted.

Otherwise, it does not appear that damage to others (Cladrastis lutea ‘Perkins Pink’, Liquidambar styraciflua ‘Variegata’, Quercus robur ‘Pendula’, Sophora (Styphnolobium) japonica, Salix matsudana torulosa, Liriodendron tulipifera ‘Fastigata’) is not enough to require complete removal although a number of the downed branches were the size of small trees!

I suppose it is normal development/change rather than coincidence that I have been planning some major pruning and shrub renovation for later this winter and early spring. This project is part of an answer to the question: “How do we increase the overall open-ness of the garden, getting more sun to the main borders, without a drastic reduction in the number of larger plants?” Although I’ve been known to be merciless when I have decided that a plant no longer serves the purpose for which it was placed, it is not an activity that I relish and, in fact, I am normally quite hesitant to do anything that might injure a plant (due to my own ignorance) and especially to remove one that I put there in the first place. I’m quite sure I’m not singular in this feeling. Feeling guilty helps some and maybe it will deserve some credit for making better decisions in the future. (Guilt being what we feel when our decisions/actions cause unintended harm to someone else – as such, it can be a valuable emotion and does not always or even necessarily deserve all the bad press it gets)

Note:wrong plant in the wrong place decisions are a part of that malady that effects most serious gardeners: plantaholism, the uncontrolled (as opposed to uncontrollable) desire to have more plants. A friend of mine notes that you might as well feed it, since it will never go away! So true and therefore the real issue is not one of finding the right “give it up’ methodology, but of exercising (as opposed to exorcizing) a degree of intelligent direction and artistic control in the selection process. For example: being hit with the raging desire to have a really blue concolor fir (assuming you’ve figured out how not to kill them in two years or less) and determined to do so no matter what (which includes the fact that you have absolutely no room for another tree that wants to be 25-30’ at minimum), just look for a dwarf or, even better, a miniature cultivar. Yes, you can have your cake and eat it too, just be careful about what size cake you get!

PS – here’s a helpful hint about pruning (I teach this in our maintenance classes): if pruning for size, prune from the inside out (the oldest, largest growth first), and if for shaping, prune from the outside in. If for both, do both in the order given.